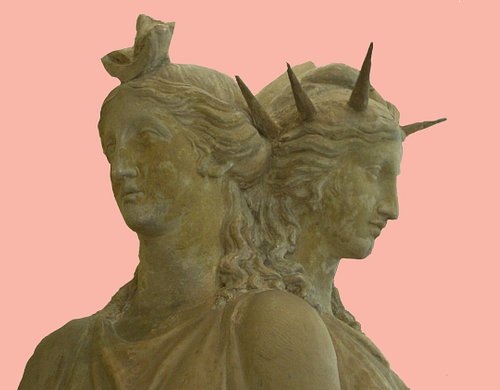 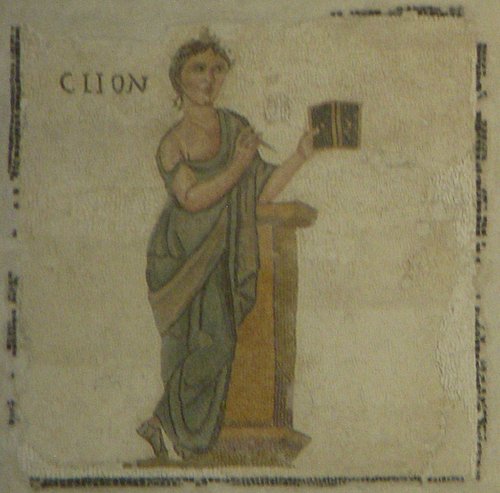 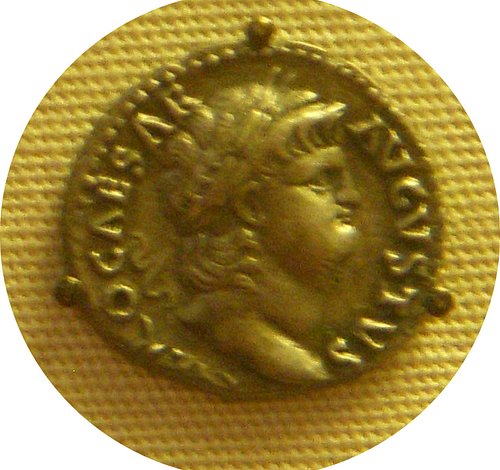 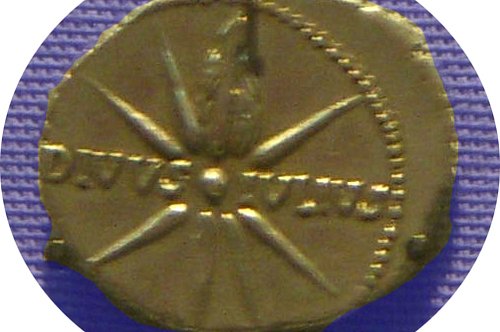 Last month we look at a denarius. This month we look at another denarius, this one from the reign of Julius Caesar. Notice that it is inscribed (in English), "Divine Julius," that is, "the god named Julius." There is also a picture of a warrior who is probably Julius, himself.

But the main feature is a radiant star. Kings and rulers had their special stars.

In Christian communities around the world, December celebrations of the birth of Jesus feature stars, and the symbolism is not accidental.

This coin is displayed in the British Museum (DeSalis Collection). It was issued in Spain.

Feel free to use this photo as long as it is not used for commercial purposes as credit is given to the photographer, Richard Davies.

The fat guy is the Emperor Nero, and the coin is a silver denarius. It is small, about the size of a U.S. dime, but it was an ordinary daily wage for a worker. (For a lot of information about Roman money, see Everett Ferguson, Backgrounds of Early Christianity (2nd ed.) p. 85.)

The denarius is quite important in the N.T. Gospels. In John 6:7, we are told that it would take at least 200 denarii to feed 5,000 people. Do the math, and it comes to about $6.50 in today's U.S. dollars. This is quite close to the cost of a basic meal in a fast-food restaurant.

The idea that a daily wage today is about equivalent to a daily wage in the Roman Empire works out pretty well.

Another sum of money that shows up in the New Testament is the Talent. This is about 6,000 denarii, and it weighs about 80 pounds avoirdupois. In today's money, one talent would be almost one million USD. (A talent would pay an ordinary worker's expenses for about 20 years, and that is also true of one million USD.)

Photo of the Month

When we read the Bible, we find that it usually refers to the Moon as a gift from God, giving us light at night. However most ancient people thought the Moon was a manifestation of evil, perhaps a demon. Witches tried to access the Moon's power.

Hecate was a strange goddess in ancient Greece and Rome. She was an underworld goddess who had the powers of the Moon. Often she is represented as three women standing around a pillar with their backs to the pillar. Sometimes she was represented as a woman with three heads. One of the three images was Artemis/Diana, goddess of the Moon, and that's what we see here. Notice the crescent in her hair. There are various explanations for the other two heads.

She was the goddess of witches and ghosts, etc. We can be glad to read the promise that God will protect us from such deities.

This photo is of a statue in the Vatican Museums. The statue is at least ten feet tall. If you want to use this photo, give credit to Richard Davies, photographer.

The song says, "Don't know much about history . . .," but everything is "history." We really should pay attention to history. The people of the Roman Empire knew that there were serious consequences for not paying attention to the lessons of history.

The picture is of "Clio," the muse of history. There were only seven muses, so it is significant to think that one of them specialized in history.

Today historians debate what constitutes "history," and in the writings from the time of the Roman Empire we find several approaches to deciding what to record as history and how to record it. The New Testament Book of Acts is history by ancient standards and we should pay attention to it.

The picture of Clio is in the Roman National Museum Plazzo Massimo in Rome. Photo by Richard Davies. Please give credit to the photographer and do not use the picture for commercial purposes.